When the U.S. State Department says building the northern leg of TransCanada's controversial Keystone XL pipeline won't have a major impact on Alberta's oilsands development, the doesn't mean it will there is no major impact for investors in TRP.  Approval will be a positive catalyst for share prices for TRP. 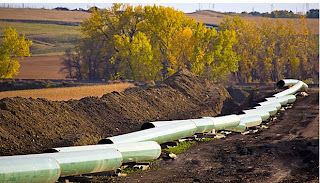 Specifically, the U.S. State Department says that the pipeline "remains unlikely to significantly impact the rate of development of the oilsands or the demand for heavy crude oil in the United States."  The key word is 'rate' - but what will be impacted is the economics of that development.  Today, crude from Alberta's oilsands sells at a 30 per cent discount to the benchmark U.S. counterpart.  The northern leg of Keystone XL will improve the market price for Alberta crude.

Other catalysts for TransCanada in the near term?  The company said fourth quarter results were hurt due to plant outages at Bruce Power in Ontario (TransCanada is a partners in the nuclear power company on the wavy shores of Lake Huron).  That should turn around with the plant back online.  Recently the Bruce B Unit 6 825 megawatt unit was safely shut down after what TRP calls "impressive 556-day continuous run for which made it the top-performing pressurized heavy water reactor in the world last year."

Sadly yes. Check out the The Chantays 1962 hit Pipeline performed on Lawrence Welk.  Cable news is reporting on the controversy that the boys might have lip synced!  OMG! Judge for yourself.