When IG "double-taps" their zombie funds, rolling them up into similar viable funds, it creates a survivor bias in the returns - the performance of the zombies is deep-sixed forever while that of the continuing fund lives on.

What is the impact of this? A Zero Alpha Group news release stated it simply as this:

According to the Savant Capital/ZAG study, when the little-understood “survivor bias” factor is taken into account, actively managed mutual funds in all nine of the Morningstar Principia “style boxes” lagged their related indexes for the 10-year period. In all but one of the 42 narrower Morningstar fund categories, the survivor bias effect worked to inflate fund returns. The Savant Capital/ZAG analysis also shows that the purging of the weakest funds from the Morningstar database boosted apparent returns on average by 1.6 percent per year from 1995-2004. 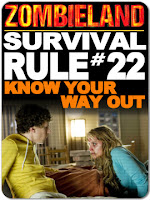 I don't know what the big deal is.  IG doesn't even show fund return on my statements.  Just like in Zombieland Rule #22,  you have to know your way out .. of Investors Group funds that is.  Wait for those sky-high redemption penalties (deferred sales charges) to wind down, work on your cardio, and run away into some index ETFs that can mimic the return of the increasingly bigger and bigger IG survivor / continuing funds.